In the past battlefields were specific, strategically chosen locations. With the exception of ambushes, wars of the past have a sense of locality about them. On the contrary, today’s armed forces no longer have that luxury. The battle can easily start in
tropical jungles, move towards an urban attack on a city and might end with an ICBM (Intercontinental Ballistic Missile) attack from space. While definitely a frightening scenario, the truth is that battle lines no longer exist and conflicts may erupt at any place and time.

In order to deal with such scenarios, the armed forces of countries all around the world are always on the highest alert, on the lookout for a missile launch or for troop movements. Furthermore, all these various possible scenarios require a lot of training for the soldiers before they can be sent to war. The training period lasts from at least a couple of months to several years, depending on a variety of factors. Additionally, an enormous financial budget is required for the training of all these soldiers, as well as for maintaining their alertness and battle readiness. However, what if technology were to play a more mainstream role in direct combat? That seems to be the general direction that armed forces all around the world seem to be heading towards.

The idea of using robots in war is not a radically new one and various militaries around the world have begun the widespread adoption of robots along front lines. Today, we have drones that are piloted remotely and are capable of taking out targets. There is also heavy on-going research to make the drones more autonomous, thus reducing the requirement on humans. There are also legged robots in development that can aid and assist soldiers in moving their equipment and luggage from place to place, and is resilient to various land texture and features.

Although billions of dollars each year are spent on military robotics research, there are still few mass produced military robots being used in the real world. The following is a list of the most well known: 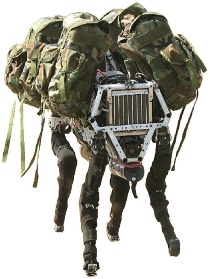 BigDog is a legged robot under development of Boston Dynamics, with funding from DARPA. Their goal is to build unmanned legged vehicles with rough-terrain mobility superior to existing wheeled and tracked vehicles. The idea system would travel anywhere a person or animal could go using their legs, run for many hours at a time, and carry its own fuel and payload. Read More