BigDog is a legged robot under development of BostonDynamics, with funding from DARPA. Their goal is to build unmanned legged vehicles with rough-terrain mobility superior to existing wheeled and tracked vehicles. The idea system would travel anywhere a person or animal could go using their legs, run for many hours at a time, and carry its own fuel and payload. It would be smart enough to adapt its posture and behaviour according to the terrain with minimum human guidance and intervention. The BigDog robots have taken steps toward these goals, though there remains a great deal of work to be done.

BigDog has on-board systems that provide power, actuation, sensing, controls and communications. The power supply is a water-cooled two-stroke internal combustion engine that delivers about 15 hp. The engine drives a hydraulic pump which delivers high-pressure hydraulic oil through a system of filters, manifolds, accumulators and other plumbing to the robot’s leg actuators. The actuators are low-friction hydraulic cylinders regulated by two-stage aerospace-quality servo valves. Each actuator has sensors for joint position and force. Each leg has 4 hydraulic actuators that power the joints, as well as a 5th passive degree of freedom. A heat-exchanger mounted on BigDog’s body cools the BigDog’s on-board computer controls locomotion, servos the legs and handles a variety of sensors. BigDog’s control system keeps it balanced, navigates, and regulates its energetics as conditions vary. Sensors for locomotion include joint position, joint force, ground contact, ground load, a gyroscope, LIDAR and a stereo vision system. Other sensors focus on the internal state of BigDog, monitoring the hydraulic pressure, oil temperature, engine functions, battery charge and others.

BigDog weighs about 109 kg, is about 1 meter tall, 1.1 meters long, and 0.3 meters wide. In separate tests BigDog runs at 6.5 kilometres per hour and climbs slopes up to 35 degrees. It is able to walk across rubble, climb a muddy hiking trail, walk in snow and water, and is able to carry a 155 kg load. BigDog set a world’s record for legged vehicles by travelling 20.5 kilometres without stopping or refuelling.

BigDog is usually driven by a human operator who works through an operator control unit (OCU) that communicates with the robot via IP radios. The operator uses the OCU to provide steering and speed input in order to guide the robot along its path and to control the speed of travel. The operator can also tell the robot to start or stop its engine, stand up, squat down, walk, trot, or jog. A visual display provides the operator operational and engineering data. The operator is responsible for directing the robot while BigDog’s on-board control system operates the legs, provides stability on rough terrain, and reflexes responses to external disturbances. 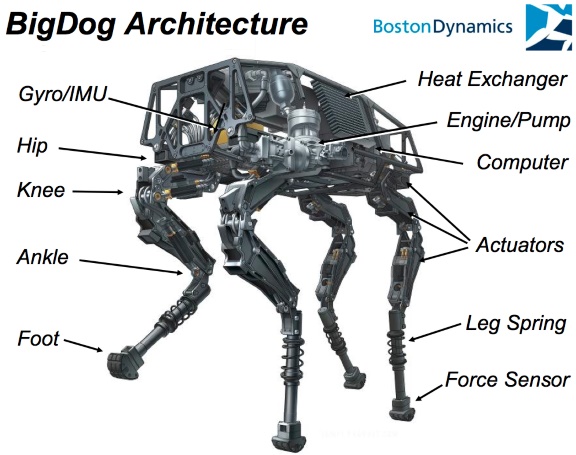 BigDog is equipped with a stereo vision system and a LIDAR. The stereo vision system was developed by the Jet Propulsion Laboratory. It consists of a pair of stereo cameras, a computer and vision software. The stereo system can be used to acquire the shape of the 3D terrain just in front of the robot, and also to find a clear path forward. The LIDAR is being used to allow BigDog to follow a human leader, without requiring the operator to drive continuously.

BigDog’s control system coordinates the kinematics and ground reaction forces of the robot while responding to basic postural commands. The control distributes load amongst the legs to optimize their load carrying ability. The vertical loading across the limbs is kept as equal as possible while individual legs are encouraged to generate ground reactions directed toward the hips, thus lowering required joint torques and actuator efforts.

The control system adapts to terrain changes through terrain sensing and posture control. By using joint sensor information it determines when feet are in contact with the ground and it also determines the desired load on each leg and actuator. A posture algorithm controls body position by coordinating the kinematics of the legs with the reaction forces of legs in contact with the ground. The posture algorithm implements computed leg compliance on uneven terrain. This approach allows control of body roll, pitch, and height relative to the ground, thereby allowing BigDog to adapt to local terrain variations without higher-level terrain sensing.

BigDog adapts to the terrain in two ways. It adjusts body height and attitude to conform to the local terrain, and it adjusts footfall placement to compensate for orientation of the robot body and ground plane relative to gravity.

The developers are working on it’s improvements in order to make it more autonomous, quiet and be able to walk on even rougher terrain.