The Eurobot is a new robotic assistant designed to move around and work on a planet’s surface either autonomously or in cooperation with astronauts.

It has a pair of robotic arms with interchangeable tools, force and torque sensors and advanced vision systems, including a 3D camera. It can also transport an astronaut, who can operate it by simple voice commands or a joystick.

The current prototype, named Eurobot Ground Prototype (EGP), is capable of transporting 150 kg, including a suited astronaut. It has four driven wheels and is highly manoeuvrable, with its back wheels steerable over 120°. 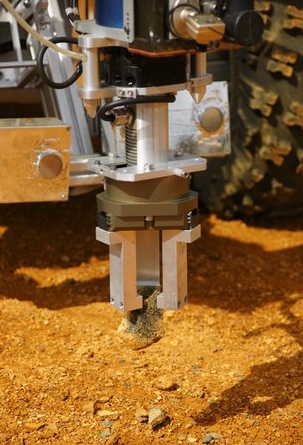 Eurobot can be controlled from Earth or from a station located for instance on the International Space Station. Thales Alenia Space is leading the project under a contract from ESA.

During the Rio Tinto Analogue Mission the ESA team was assisted by Thales Alenia Space Italy and Joanneum Research; both are subcontractors on the project. Philippe Schoonejans, Eurobot Project Manager at ESA described the importance of working closley with all these groups. “Testing the synergy between an astronaut, rover and mission control centre also provided valuable lessons for planning future operations on a planetary surface and improving the rover design.”