GroundBot is a self-contained autonomous Robot developed by Rotundus. GroundBot has been designed as a sealed unit with no external moving parts. Instead an internal gyroscopic weight is used to propel the Robot forward, as shown in the adjacent diagram.

GroundBot has been designed for use in harsh environments, where traditional wheeled or tracked Robots may not function properly. These environments include: investigating gas leaks, interplanetary expeditions and locating earthquake survivors. The Robot can operate in most terrains including deep snow, ice, mud and sand. Due to the sealed design of the robot (Encapsulation class IP67) it is also capable of floating on water. 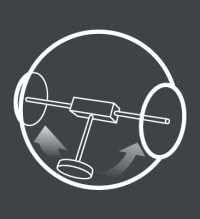