Pepper is a humanoid robot by Aldebaran Robotics and SoftBank Mobile designed with the ability to read emotions. It was introduced in a conference on 5 June 2014. Pepper is not a functional robot for domestic use. Instead, Pepper is intended “to make people happy”, enhance people’s lives, facilitate relationships, have fun with people and connect people with the outside world. Pepper’s creators hope that independent developers will create new content and uses for Pepper.

To enable it to live among humans, Pepper is packed with many of the latest technologies. With over 20 degrees of freedom of movement in its head, arms, waist and son on. Pepper is able to engage people in communication by performing natural movements. It has several types of sensors mounted around its body. Used in combination, these make it possible to engage in rich communication with people, while at the same time enabling it to move safely. It is not only equipped with a large-capacity battery, but also moves itself around by using ‘omniwheels’ that can move freely through 360° , allowing it to operate continuously for long periods of time. 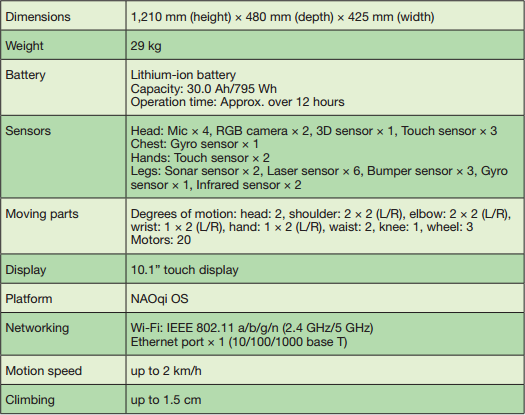