Microsoft Robotics Developer Studio (MRDS), previously known as Microsoft Robotics Studio (MSRS), is a Windows-based environment for hobbyist, academic and commercial developers to create robotics applications for a variety of hardware platforms. RDS includes a lightweight REST-style, service-oriented runtime, a set of visual authoring and simulation tools, as well as tutorials and sample code to help get started.

Microsoft Robotics Developer Studio supports a broad set of robotics platforms by either running directly on the platform or controlling it from a Windows device through a communication channel such as Wi-Fi or Bluetooth. 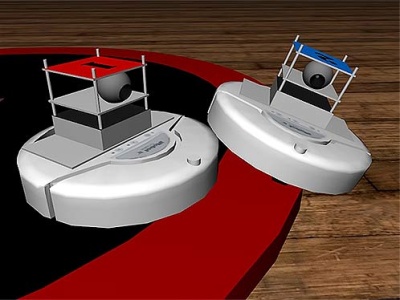 In addition to providing support for Microsoft Visual Studio, Microsoft Robotics Developer Studio provides a visual programming environment which allows developers to create applications simply by dragging and dropping components onto a canvas and wiring them together. The primary programming language is C#.

To help developers getting started, the studio contains extensive documentation and a large set of samples and tutorials that illustrate how to write applications ranging from simple “Hello Robot” to complex applications that simultaneously run on multiple robots.

There are four main components in MRDS:

CCR and DSS are also available separately for use in commercial applications that require a high level of concurrency and/or must be distributed across multiple nodes in a network. This package is called the CCR and DSS Toolkit.